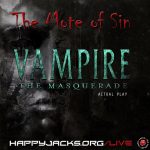 Note: This is the final session of the Mote of Sin. We’d like to thank our listeners and viewers, who we hope enjoyed this game as much as we did. After listening, you can check out the PC’s epilogs on our forum, under the AP Feedback heading.