Last night, I play tested an adventure I’m planning on running on September 4th at Gateway, a game con near LAX.

This is the first time I’ve run GURPS since probably the mid-1990s. I also had some players who were brand new to GURPS as well. 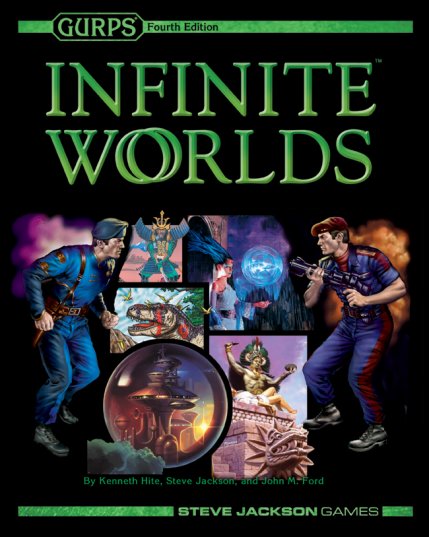 For this game, I used 4th Edition’s “Infinite Worlds” setting. The Infinite Worlds book is sadly out of print, thought it is available as a .pdf from Steve Jackson Games. I purchased my copy used on Amazon.com.

I should mention that you don’t need the Infinite Worlds book, as the last chapter is the core books gives the GM more than enough information to get an Infinite Worlds campaign going.

In this scenario, the party was a team of newly trained, dimension-hopping operatives from the Infinity Patrol.  Their first assignment was an alternate Earth, codenamed Mage Gulch, which is an old-West timeline with rare smatterings of magic.

1. GURPS 4th is Big and Exhaustive

In some ways players new to GURPS4 will suffer some structure hunger during character generation. The Character book for GURPS4 is very inclusive — damn near exhaustive. That single rulebook can make human snipers, dwarf paladins, wizards, superheros, robots, vampires, sentient tarantulas — pretty much anything you can think of. 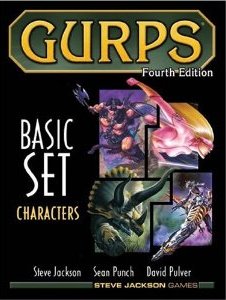 Players without a good idea of their character concept can find themselves caught in the trap of flipping through the advantages, disadvantages and skills, exploring the endless possibilities. For a beginner especially, there’s too much to cull through. And with only one book on-hand, that slowed down everyone else.

In the future, I’m going to print out lists of advantages, disadvantages and skills, (with their point costs, etc.), culled from the whole list to leave out those inappropriate to the setting.  That way, as the players are making their quasi-old-West characters, I won’t have to answer questions like, “can I take “Doesn’t Breathe?” “Ooh, can I have extra limbs?”

I purchased the GURPS Character Assistant (GCA) a couple months ago. While I’ve played with it a little, I don’t have a lot of experience with it. One of my players was using the GCA to make her character. Apparently it kept crashing.

While I haven’t experiences any crashing myself, I have noticed that it runs pretty slowly, almost like running a Java program.

We also discovered it wasn’t adding up character points correctly. This is probably due to the crashes, I’d guess.

We again ran into the problem of 4th Edition’s inclusiveness. When the new player was looking for skills,  for example, she was staring at a very long drop-down menu. It’s daunting. 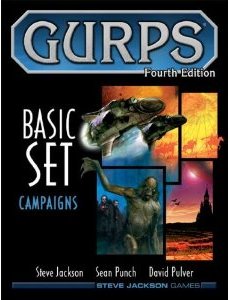 Once character generation was over and the game started, the game mechanics conventions of GURPS came back to me easily and the game, including combat, moved along at a nice pace.

Just as I had remembered from the old days, more than anything, the story drove the pace of game play. Combat was fast and decisive, determined by sound tactics, surprise and superior firepower (mostly sniper rifles from several hundred yards away). Fantasy-styled combat — with melee weapons, etc. — does take longer, but it’s still pretty quick.

4. GURPS Can Be Deadly

One of the characters (Stork’s) died at the conclusion of a contest of stealth and tracking between him and the enemy sniper. In the modern world with modern weapons, fighting kills people. Same goes for GURPS.

I have the GURPS 4th Ed. GM Screen, and it is handy. I found myself consulting the ever-popular Size/Range Modifier table many times. Some of the stuff I don’t use much, like the reaction table.

I think the first thing I want to make is a hit location/damage type matrix.

As I’ve mentioned, GURPS uses hit locations, and different types of weapons affect different body parts differently — a club to the sternum is not nearly as deadly as a bayonet to the sternum.

Until I have these new damage types memorized, having a chart for reference would be very handy.

I own the Savage Worlds universal GM screen (it’s got three folding vinyl envelopes — like three-ring notebooks).  I’ll probably make my own reference charts and drop them in when I’m GURPSing, as I tend to look in certain places for specific things when playing, and for some reason no GM/DM screen is laid out intuitively for me.

Yesterday’s session was awesome. The players made good, compelling characters; they were engaged in the story, pursuing  every lead relentlessly; and they thought out what they were doing, anticipating the repercussion of their actions and reacting to unforeseen complications quickly.

I think there are a lot of reasons it was such a good game: the players were total engaged, it was a somewhat familiar setting (old-West), and it was a nice break from the sword wielding and DPS tossing of DnD4E.

But I also think one of the reasons the players took so well to the scenario is precisely because of the system we used. GURPS strives to simulate real life. The outcome of the characters’ actions in-game are consistent with the players’ experiences and assumptions in real life.

Both worlds work the same. If someone takes a .50 cal sniper rifle round to the head in Iraq, it is just as catastrophic as it is in Neverland. This familiarity allows the players to use their intuition and be c9rrect.

I’m sure Part 2 of the game is not far off, as I was able to successfully end it with an enormous cliff-hanger, so there’ll be more later.