We try to record all of the games we play. Currently, Bill is running a Star Wars game in Mongoose Traveller. I’m running two games: a DnD5E game, called Eldemy and a Vampire: the Masquerade 20th Anniversary Edition game, called the Mote of Sin.

We have been asked many times by listeners how we get good sound on our actual plays. There are three factors contributing to a good recording: the space, the equipment and the ability to use the equipment.

Any quiet space is suitable to record an actual play. The less natural reverberation the better. A carpeted floor is better than a tile or hardwood floor. A wall with bookshelves is better than a blank wall. That said, it’s easy to go overboard for very little gain in recording quality.

For my actual plays I use the following equipment:

The Tascam DR40 is great workhorse recorded. It comes with an SD card that can be upgraded to a bigger card. It can supply phantom power for condenser mics and it has a dual recording mode that will record a second set of tracks at -10dB in case you set the recording levels too high. It’s a fantastic, reliable recorder.

This is a reference mic used to calibrate audio systems, it’s also an omnidirectional condenser microphone, and an inexpensive one at that. These are the microphones we us.

These are decent quality, durable microphone cables. I’ve tried several brands from Amazon, and these have held up pretty well.

While I haven’t used this specific dual mic rack, it looks like it would do the job (the one I use is very old and probably not available any more).

You’ll also need a mic stand with an extended boom to allow you to get the mics over the table. In my studio, I have two hook in the ceiling, and I’ll hang these microphone by their mic cables. It’s a great setup, but not very mobile. 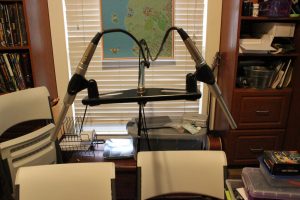 Here is my setup. The mics are positioned as close to the center of the table as possible. They hang about 2-1/2 feet above the surface of the table.

It is important to set the levels for the recording properly. Don’t set them too high or you’ll end up with digital distortion (though if you record in dual mode on the DR40, you’ll have a back up at a lower setting). I suggest erring on the side of lower levels. You can always raise the levels later.

After the recording is finished (I record to an mp3 file), I import it into Reaper, which is an inexpensive, but powerful audio recording and editing program. I step up the volume by adding a limited to the track and to the stereo master track in Reaper. I usually set the threshold about -9 to -15 on each. If the air conditioner is running, I’ll often EQ out some of the lower frequencies to try to cut the A/C sound. You can’t get rid of it entirely, but you can make it less present.