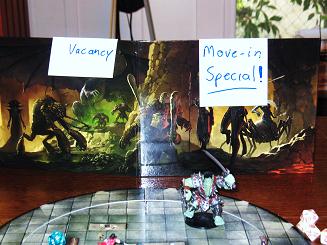 There seems to be a shortage of DMs.When I put out the word that I was planning on DMing a 4th Ed. game, I had almost a dozen players in a matter of weeks. Since starting the campaign, I’ve had to turn down about eight players who want to join.

I’ve seen our local Meet-up group have to ask several times to get enough DMs for their monthly meetups.

I have two theories as to why this is happening:

1. New players,  many probably coming from WoW and other MMORPGS, are trying out the hobby. They don’t have much interest in DMing. MMORPGs don’t have DMs (yet).

2. The 3.5 and 4th Edition schism. One of the complaints I’ve heard from people reluctant to switch from 3.5 to 4th is that they are too heavily invested in 3.5. When you’re sitting around a gaming table, who at that table likely has the largest investment in the system you’re playing? The DM. I’d be willing to bet there are quite a few DMs in the 3.5 camp, unwilling to invest in a new system.

So starting next week, we’re going to feature a series of episodes to encourage players to try out GMing and DMing and to share our experience to give them a running start.

DMing has some drawbacks when compared to playing, but it can also be very rewarding.