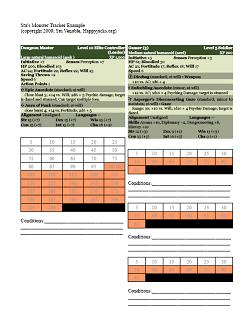 I’ve uploaded a sample of how I format monsters for encounters.

The monster stats tables are rich text copied from the Monster Builder in WOTC’s Adventure Tools.

The grids below the monsters’ stats are used to track damage taken — I make hash marks in each box up to five and move on to the next box. I’ve also colored the HP grid to denote when the monsters are bloodied.

Below each monster’s grid are a few lines to note conditions the monsters are suffering. I cross them out when they save/end.

This is a work-in-progress that I’ll modify as the game progresses. I’m interested in find out how other GMs and DMs track monsters during combat. Do you do something similar? Have you come up with another method that works well?

The following link is a pdf of the monster tracker.