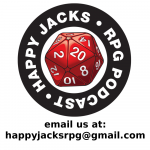 Your Hosts: Stu, CADave, HosierRob, Tim and Dave77 from Spirit of 77.

Show Notes: John from Maryland asks about travel in RPGs. Ryan writes in about what the players and characters want to do and what would be fun overall. Michael from Calif tells us about his Rusty GMing and End of Game Surprise Comic. Dan from Redlands tells us of his tragic return to gaming, and Ed from Minnesota asks if his story is a gaming horror story…

hjrp2801 Your Hosts: Stu, Kimi, Stork, Kurt In this Episode: Jo Lene writes in about L5R Clans and how your initial exposure to the game...

hrjp2718 Your Hosts: Stu and Kimi In this Episode: Dave in DC writes in about a Con Game with a Cursed Newspaper. Simon in London writes in...

hjrp2717 Your Hosts: Stu, Jim Ryan, Stork Jim (otherdoc on Twitter) hosts RPG Actual Plays on Twitch. You can find his other projects at...